I Like My Hose Loads with a Side of Versatility

I Like My Hose Loads With a Side of Versatility

While attending a regional fire school recently, several of us spent the good part of one evening enjoying the Brotherhood and solving all the fire service problems of the world. Â At one point the discussion turned to the hose loads used by those at the table. Â One of the Brothers stated â€œI couldnâ€™t care less what type of hose load we useâ€¦.â€ Â I was slightly taken aback by the statement to say the least. Â Could it be that there are firefighters out there that truly donâ€™t care? Â Could it be that I care too much about the hose loads carried on my apparatus? 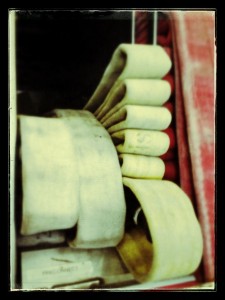 Weeks later I thought back on that conversation and came to realize I DO care about my hose loads. Â I care that my Nozzle Firefighter can quickly and effectively make a stretch to any entrance of the building by his or herself. Â I routinely respond with a Driver/Operator, a Firefighter, and myself. Â We have to make our stretch correctly the first time, every time. Â To me, the place to start is with the versatility and usefulness of the hose load.

I started my fire service career 28 years ago. Â I began asÂ a snot-nosed 20-year old rookie riding tailboard (yes, really), then in the jumpseat, then as a Driver/Operator and finally the past 17 years as a Company Officer. Â Iâ€™ve stretched a hose line once or twice in my career. Â Iâ€™ve also used just about every hose load you can imagine including some that were developed by my department. Â It wasnâ€™t until I attended Nozzle Forward and was introduced to the concept of the minute-man load thatÂ the light bulb finally wentÂ on for me. Â This was the first time in 28 years that I found a hose load I felt was truly versatile at making all types of stretches. 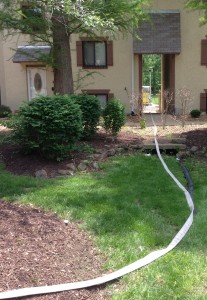 One of the biggest strengths of the minute-man load is that the Nozzle Firefighter shoulders at least half of the load. Â This allows them the ability to move freely to the point of entry. Â Dragging of hose and the tendency of it to become hung-up on obstacles is greatly reduced. Â The Nozzle Firefighter is then free to concentrate on looking at the terrain and sizing up the building for anything I might miss. Â Once at the point of entry, the nozzle bundle is deployed perpendicular to the entrance and then charged. Â With the hose pointing in the door, advancing the hose through the house is easier as the friction points of the door jamb are minimized. Â All the excess hose is right outside the door making it easier for the back-up firefighter (me) to feed slack for the 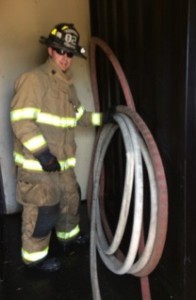 Nozzle. Â The Nozzle bundle can also be converted into a coil (mimicking a Cleveland Load) in a small area.

Another example of the versatility afforded with the minute-man is the ability of just the Nozzle Firefighter to deploy the line up stairs, down a hallway, or around the back of a structure. Â The minute-man also lends itself well to â€œshort-stretchingâ€ for those times when youâ€™ve got to manage 200-feet of hose in 50-feet of space. Â The Driver/Operator simply stretches the supply bundle opposite of the door to dump the extra hose out of the way.

One final advantage with the minute-man load is the ability to easily extend a line by shouldering the nozzle bundle, disconnecting it from the supply bundle, then adding it to the end of your line for an additional 100-feet of attack line. Â Weâ€™ll cover extending our lines in another article.

At the end of the day, it doesnâ€™t matter what hose load that you use. Â What matters is that you train with it regularly and that you can stretch it effectively at 02:00. Â Get out and train. Â Train in real settings, not just in front of the station. Â Get permission to make stretches at occupancies in your area that will present challenges for you.

Until next time, get out and stretch some lines!