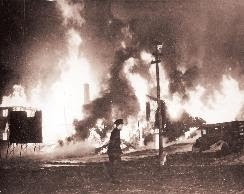 On this day in 1942, 100 people lost their lives at the Knights of Columbus Hostel in St. John’s, Newfoundland.  The building was mostly wood construction and had had most of the windows boarded up and barred to meet black-out regulations during the war.

At the time of the fire there were approximately 500 occupants in the building.  Many of these occupants and some of the dead were service men and women of World War II.  It is believed that the fire was sabotage by German Nazis who were suspected of other fires in St. Johns during this same time period.

With wood construction and combustable interior finishes and deocrations, the fire traveled fast and furious throughout the building.  With windows and doors locked, barred and boarded over, escape was difficult at best and in some cases, attempts were futile.  In addition to the 100 that perished, over 100 more were inujured, many badly burned.  Here is a good link for an article as told by a survivor.   http://www.thetelegram.com/index.cfm?sid=88617&sc;=85

As always, remember the past so that we don’t repeat it.  Train hard and stay safe.