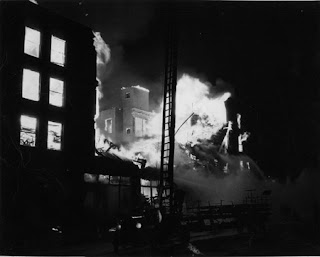 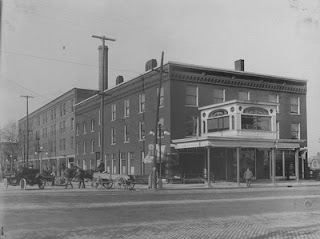 The Hotel Kerns was built in 1919 and was a brick building that boasted 162 rooms and was a favorite hot spot  noted for its bar and cafeteria.

On Dec. 11, 1934 it would turn tragic when the night janitor for and adjacent business noticed flames on the 2nd floor at around 5 AM.  He immediately reported the fire and stated that when he initially discovered the fire the flames were just licking the windows, but that by the time he called it in the flames had grown rapidly to become a full sheet of fire.  He could here screams of those trapped and being burned. Some occupants were rescued by nets and by firefighters on ladders. Others were not so lucky.  It is believed that a carelessly discarded cigarette caused the fire and the lives of 34 individuals, five of whom have not been identified.

The fact that the companies for that area were only a block away proves just how fast that fire moved and how long it went unnoticed.  Smoke detectors, duct dampers, fire doors and other fire protection systems are used to keep these types of fires from happening again.  When inspecting, don’t take it lightly, make sure these systems are functional and properly installed and tested.  As always, stay safe and be careful.