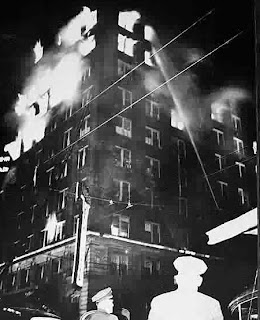 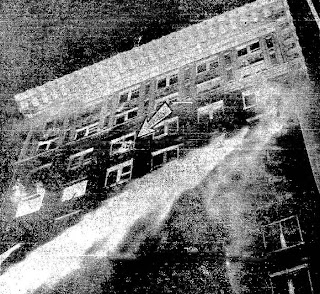 On this day in 1946, 119 people died in the deadliest hotel fire in American history.  The 15 story hotel was built in 1913 and was touted to be “fire proof” and was therefor built with no fire protection systems.

There were no fire escapes, no spinklers, no fire alarms and all of the interior finishings were highly combustible and in some instances flammable.  Since the building was built of brick on the exterior, under certain insurance provisions, the building could be classified as “fire proof” which was certainly misleading at best.
This fire was another example of the need for legitamized codes and regulations on buidlings.  Fire safety became more of an issue and ordinances became more than just a local political decision.  In addition, building design was scrutinized and blamed for the rapid spread of fire and smoke to upper floors.

The 194 rooms were wrapped around a central staircase that wound its way from the bottom to the top along with the elevator shafts. This created a “perfect” chimney and the the fire and smoke moved with great speed.  To increase the travel of smoke and fire into corridors and rooms, many wooden doors and transoms were left open and made fire and smoke travel widespread.
The fire was first noticed at around 3:00AM by an elevator attendant on the fifth floor, but by then the fire had already engulfed the third and fourth floors.  Many on the upper floors were trapped and/or driven further up from the rapidly progressing fire conditions.
This is another reminder for those government bodies that want to reduce fire and building safety codes in the name of progress and reducing costs for developers and builders.  I have personally heard discussions by local politicians discuss eliminating building departments or portions of because they just don’t see the benefit.  They claim to be understanding that we need fire safety, but they believe, in their infinite wisdom, that it is stunting growth and pushing away builders.  At what price?
We have to provide the right education and information to these “leaders” so that they understand why we have these codes.  It is to never allow another Winecoff, or another Our Lady of the Angels, or another Beverly Hills Supper Club, or Station Night Club, the list can go on.  These are horrific events that many forget or don’t even know about.  They happened and could have been prevented.
As firefighters we must take the lead in ensuring that these types of events are not allowed to happen.  I hear fellow firefighters complain and moan and groan about doing inspections.  It is not that glamorous of a task, but the implications of not doing them are terrible.  We have to instill in our people the importance of protecting our families, friends and citizens from potential disasters.  That is part of our job.
Take time to research and read about these historic fires and learn why we do what we do.  The next time you don’t want to go out and do inspections, think about the Winecoff, the Station, and all of the others that resulted in tragic fire losses. What if the Winecoff had fire protection systems?  What if the pyrotechnics weren’t used and the interior finish was appropriate at the Station?  What if???
Stay diligent and remember the mission:  To Serve and Protect.  All of the time..
Check out the video below;
http://www.winecoffhotelfire.com/

Bare Your Arms, My Country

Podcast-Saving Lives and Learning a Lesson About Addiction