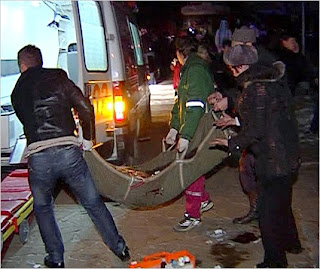 Early Saturday in Russia, a nightclub fire reportedly claimed the lives of 101 people.  The fire is believed to have been started by “cold” fireworks, that are typically fountain type displays and burn at lower temperatures compared to typical fireworks.  With recent terrorist events, it was first feared to have been another bomb or terrorist act, but, according to authorities they believe it is not a terrorist act.
Russian news agencies showed charred and burned bodies in the street just outside of the nightclub and reports are that most of the casualties are from burns and smoke inhalation.  It is also being reported that majority of victims are young adults who frequent the nightclub.
Russia is known to be lax in their fire codes and enforcement of protective measures.  This fire brings back memories of a fire in Rhode Island in 2003, The Station nightclub fire where 100 people perished from a fire started from pyrotechnics on the stage of a performance by Great White.  That fire and the deaths were contributed to variance of fire codes and the operators and bands use of pyrotechnics without a permit.
Again, there are reasons for the fire protection measures in place in the form of codes and ordinances. We jsut never know when it could be our jurisdiction having to deal with something like this.

Bare Your Arms, My Country

Podcast-Saving Lives and Learning a Lesson About Addiction