A Year Ago Today 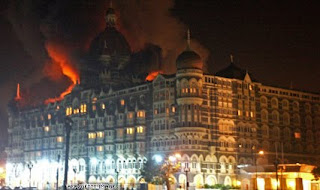 It was a year ago today that terrorists started fires in the Mumbai Taj Mahal Palace and Tower in Mumbai, India.  It was obiously during a holiday and many tourists were visiting the luxury complex.  Other facilities were targeted and when the ordeal was finally over, at least 167 people were killed between the locations and at least 400 were injured.

The hotel was heavily damaged by fire because responders could not make entry due to terrorists still being in the building holding hostages and firing their weapons.